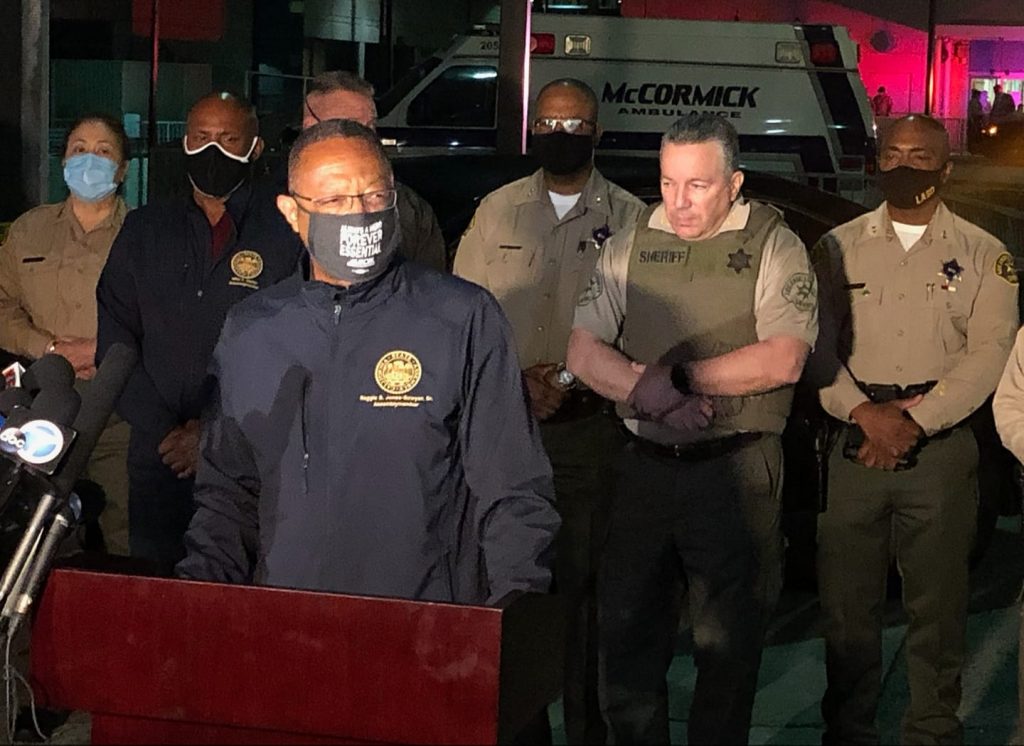 Villanueva allowed Republican Congressional candidate Joe Collins prominent press time during a recent press conference held in South LA.  Dijon Kizzee was killed by deputies, related to an unknown violation while riding his bike, and Collins urged “outsiders” to not co-opt peaceful protests and use funds they are raising to assist the family with burial and legal costs.

The most desperate and egregious act of using a community tragedy for their campaign is Asm. Reggie Jones-Sawyer.

He appeared in front of St. Francis Hospital on September 13th, in support of two deputies who were ambushed in Compton and expected to make a full recovery, but when it comes to regular everyday citizens loosing their lives, he is eerily quiet.

Asm. Mike Gipson’s son was shot near Manchester and Western, back in April, which is in Jones-Sawyer district, and he made no public comments on the matter, Anthony Rendon did.

Semaj Miller, a 14-year-old rising basketball star was slain on 87th and Main, also in Assembly District 59, and he said nothing.

The city of Compton went so far as to hold a well publicized vigil for Miller, at 6:30pm, where Jones-Sawyer was noticeably absent.

He was also M.I.A. at any of the public protests related to 29-year-old Dijon Kizzee, who was killed due to an alleged “violation” while riding his bike in the Westmont area of South Los Angeles.

Jones-Sawyer, is the chair of the Public Safety Committee, which failed to pass any comprehensive legislation related to police reform this legislative session.

It’s commendable that he took the time to get out of his bed, for a 10:42pm press conference, in the city of Lynwood, but what about the rest of the residents he represents, that aren’t members of law enforcement?

What does his position as “chair” actually accomplish outside of the tens of thousands of dollars law enforcement agencies pump into his campaigns?

We are TIRED of elected officials, who pick and choose which tragedy has the largest media value, for them to make a guest appearance.  Jones-Sawyer is playing Black residents for a fool and it’s time to reject him and his goal of securing our votes in November.