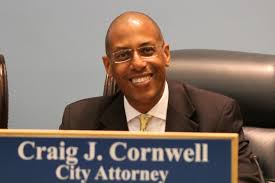 In 2018 the state audited the city of Compton due to their failure to file a financial transaction report for FY 2015-16 which raised red flags with State Controller Betty Yee’s office.

The state’s review of the Compton finances concluded that the turnover in leadership heavily contributed to the city’s financial disarray. The report identitified abuse and fraud in the spending of taxpayers money, including illegal earnings of the mayor and council that Cornwell argued they were entitled to.

The state report used minutes from the September 1, 2015, regular city council meeting which detailed Cornwell’s meeting with the District Attorney’s office where Cornwell disagreed on the findings of the DA’s office.

The DA shared they would proceed with filing felony charges against the mayor and council which led to Mayor Aja Brown immediately adjusting her salary back to $600 per month, as outlined in the city’s charter.

The report concluded that her four (4) council colleagues continued to receive monthly auto and phone allowances. All FIVE members received “other earnings” totaling $7475, by December 2015, that the city couldn’t account for.

Another deficiency noted by state auditors was the lack of a Human Resources Director for the last three years. Residents see that Cornwell has been in litigation with current HR Director Kareemah Bradford for YEARS and recently settled one lawsuit with her for approximately $600k + attorney fees. Bradford was also on the council agenda last night with another ongoing case.

The auditors findings also concluded the city didn’t comply with purchasing procedures and contracting requirements which also falls on the City Attorney. When items are placed on the agenda they are required to go through the review process which includes a mandated review by the city attorney’s office, which Cornwell led. If his office were in fact reviewing documents for compliance, how did the state identify this as an area of concern?

Serving in an elected capacity, 2UrbanGirls expected to see Cornwell tackle issues like illegal marijuana dispensaries, code enforcement and the like as the Los Angeles City Attorney Mike Feurer, who is also elected does. Instead, Cornwell most resembles Inglewood City Attorney Ken Campos who isn’t elected and serves at the will of the council.

Based on the District Attorney’s letter, and the council’s continuance to take and spend taxpayer money unauthorized, there is a profound lack of respect for Craig Cornwell and his appointment to City Manager is neither acceptable nor is his $30,000 pay increase.

During last night’s council meeting, it was stated that Cornwell was appointed City Manager at the recommendation of auditors despite that not being in the report published in March 2018.

State auditors sent a letter to the council commending their addressing the deficiencies under former City Manager Cecil Rhambo.

Is Craig Cornwell the best choice to lead the city when he has had his hand in the city’s non-compliance dating back to 2000 when he first began working in the City Attorney’s office under former City Attorney Legrand Clegg? Clegg was responsible for changing the city’s charter to get Cornwell appointed City Attorney as Cornwell wasn’t a Compton resident as dictated by the city charter.

This is not the first time Compton has named someone from their City Attorney’s office to the City Manager position. Former Deputy City Attorney Cal Saunders became the interim City Manager back in 2004 under former Mayor Eric Perrodin. After serving Compton, Saunders landed in the city of Inglewood and resigned under mysterious circumstances.

There’s something rotten in the city of Compton.